Happy New Year! There’s no finer time to dust off that old favorite in your game library and inviting folk over for a grand night of gaming! Or, perhaps, you would like to try something new? Well, you’re in luck because there’s certainly no shortage of truly FANTASTIC games out there just waiting for you to pick them up and give them a shake, rattle, and roll. 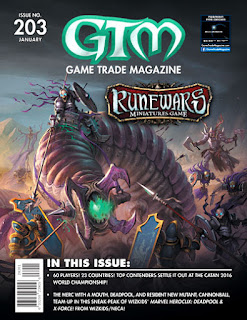 We would like to invite you to enjoy what will be a new staple in GTM, “By The Numbers”. In this new column, Corey Perez and Luke Hardy will be discussing (and demonstrating) various painting and modelling techniques with a variety of figures and paint sets.

Courage Wanted! Take command and prepare your armies for epic battles in an age of heroes in Fantasy Flight's RuneWars: The Miniatures Game!

Join the best on the path to Victory! 60 players from 23 countries gathered to determine the next Catan world champion!

Brave terrible guardians, foul cults, and the burning sands of the desert to stop the rebirth of an ancient tyrant in Mummy's Mask, the latest base set for Paizo's Pathfinder Adventure Card Game. 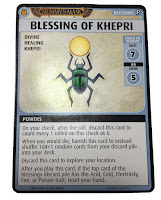 This complete, cooperative strategy game pits 1 to 4 heroes against the monsters, curses, and traps of the Mummy`s Mask Adventure Path. Choose your character`s class, build a deck of equipment, magic, and allies, and explore dangerous locations as you journey through an exciting fantasy tale. As your adventures continue, your characters add unique gear and awesome magic to their decks as they gain incredible powers, all of which they`ll need to challenge more and more powerful threats.