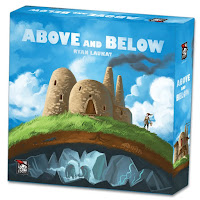 Above and Below
Red Raven Games
SKU: PSI RVM009
Explore a massive cavern and build your new village - above and below ground - in this storytelling/town-building mashup board game. In Above and Below, players take on the role of a village leader trying to grow a new town after the previous village was destroyed by barbarians. Interestingly, a network of caverns lies beneath the site for the new village, and players will become engaged in the storytelling aspect of the game as they send their villagers to work on varied tasks such as exploring the cave, harvesting resources, and constructing houses.

Luna
Tasty Minstrel
SKU: PSI TTT2007
The end of her regency is nigh. It's time to clear the way for a new bearer of the burden. She will keep a wary eye on the novices representing their Orders and trying to win her favor. Eventually, she will have to come to a decision. Which Order will prove itself worthy to decide on her successor? There will be a new Moon Priestess and she will bear the title: LUNA.

Among the Stars New Dawn
Stronghold Games
SKU: PSI SG-8017
Twenty years after the Alliance was formed, the cost of constructing new space stations is becoming unbearable. In order to improve the economy, the Alliance has decided to rebuild and recolonize some of the planets and space facilities that were abandoned during the war. By activating them once more, the Alliance is hoping to acquire much needed funds and resources. In New Dawn - a thematic sequel of Among the Stars and part of the Among the Stars Universe series - players take on the role of Alliance officials. Their assignment is to explore and revive a galactic sector. 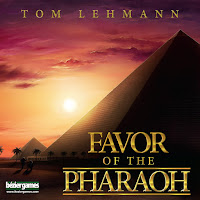 Favor of the Pharaoh
Bezier Games
SKU: PSI BEZFOTP
In Favor of the Pharaoh, players roll dice to advance in Egyptian society, each turn gaining a new contact and more influence. These contacts give players more dice to roll or special powers to adjust those dice. The game culminates in a tense final roll-off as players vie for the Pharaoh's favor. This re-imagining of Tom Lehmann's To Court the King boasts over 50 different characters, each of whom has a unique ability. 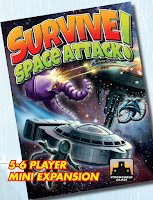 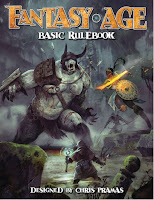 Fantasy AGE Basic Rulebook
Green Ronin
SKU: GRR 6001
A New AGE is Upon Us! The Adventure Game Engine (AGE) roleplaying rules are easy to learn, and feature an innovative stunt system that keeps the action tense and exciting. The Fantasy AGE Basic Rulebook includes complete 20 level advancement for all three classes, a new magic system, advice for players and GMs, and an introductory adventure. Use Fantasy AGE to run adventures in the campaign setting of your choice, or a world of your own creation. 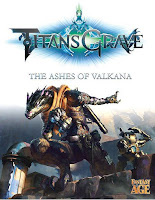 Titansgrave The Ashes of Valkana
Green Ronin
SKU: GRR 6002
Grab your blaster and ready your spells, Titansgrave needs heroes! An original science fantasy roleplaying setting that mixes high magic and hi-tech, Titansgrave: The Ashes of Valkana is Wil Wheaton's new tabletop RPG show on Geek & Sundry. This companion book for the Fantasy AGE RPG gives you background information on Titansgrave, as well as all the adventures featured on the show, plus new encounters and options that will allow you to make the story your own. 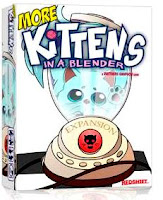 More Kittens in a Blender Expansion
Redshift Games
SKU: PSI RDS1002
This expansion for Kittens in a Blender adds 32 unique kittens to the game in two new groups, allowing for play with up to six players (or teams). It also has color-reminder cards, and "Flavors" that add a new dimension to the strategic play. If you are having trouble rescuing your kittens, and you really, really can't keep them out of the blender, throw some vanilla extract or strawberries into the mix and make a smoothie!