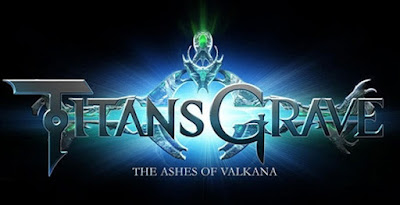 Titansgrave: Episode 3
Danger At The Market
The Beer Baron and Keg-E bid farewell to the party after considerable celebration and revelry. In an attempt to learn more about their mysterious orb, the group heads to Nestora in search of Farkiah the Antiquarian. Excited for an opportunity to bargain, barter, and more importantly, shop, the heroes quickly head to the market district, but they soon find that it holds more than goods. What does the city-state have in store for our heroes? Tune in to find out.

In case you missed the last episodes:

Titansgrave: Episode 2
Evil Awakens
When we last saw our heroes, the beer had been saved and celebrations had ensued. The Beer Baron, having made the last stop in his yearly delivery trip, asks the party to escort his caravan to his estate. Aankia, Kiliel, Lemley, and S’Lethkk find themselves surrounded not only by the rarest of beers, but also by a threat so ancient that it hasn’t been seen since the days of the Chaos Wars. How will our heroes handle themselves?

Titansgrave:Episode 1
The Journey Begins
Under the recommendation of Gurlock the Beer Baron, the party ventures off to Nestora, where they find themselves swept up in a festival of sorts called the Battle of the Boasts. Adventure, excitement, and free beer await our heroes, but the good times only last for so long…

Titansgrave: Episode 0
Wil Wheaton Introduces Valkana!
Join Wil Wheaton, Hank Green, Alison Haislip, Yuri Lowenthal, and Laura Bailey for an overview of the world of Valkana! Titansgrave: Chapter 0 is an introduction to the basics of role-playing games, the Fantasy AGE system, and the characters and lore that make up the world of Valkana. Whether you’re a seasoned RPG player or newcomer to tabletop games in general, don’t miss the prologue to Titansgrave: Ashes of Valkana!

Treasures of all types! But the hard part is not capturing the ship’s bounty, but dividing it fairly to the pirates! Players take turns splitting each round’s booty into shares for the other players. Different types of treasures have different values, and of course there’s the hidden items to keep people guessing. Will you be the quartermaster to give everyone their fair share–but giving yourself the best share?
Balancing what you need, what others might want, and trying to get a little extra into your treasure pile is the key to success!

A Cooperative Game for 3-7 Crewmates, ages 10+, By David E. Whitcher

You are about to begin your 5-year mission aboard the USS Enterprise. But which one - Classic Enterprise NCC-1701 or the Next Generation NCC 1701-D?
ALERT! You and your fellow crewmates must cooperate to resolve dangerous situations that threaten to destroy your ship. Solving threats is the way you score points for your crew and win the game. If you fail, you all lose.

Each crewmate has a unique ability. These abilities can help the team solve alerts. Use your skills wisely to give your crew the best chance at success.

So, which is the crew for you—The Original Series, or the Next Generation?

Kingdom Builder
ASM Q-60832
Claim Land! Build Your Empire! You're a young ruler, but that's no reason not to go out and claim land for your kingdom. Through careful placement and a little bit of luck, you'll be able to connect your realm to new castles, acquire special abilities, and earn enough gold to rule the land!