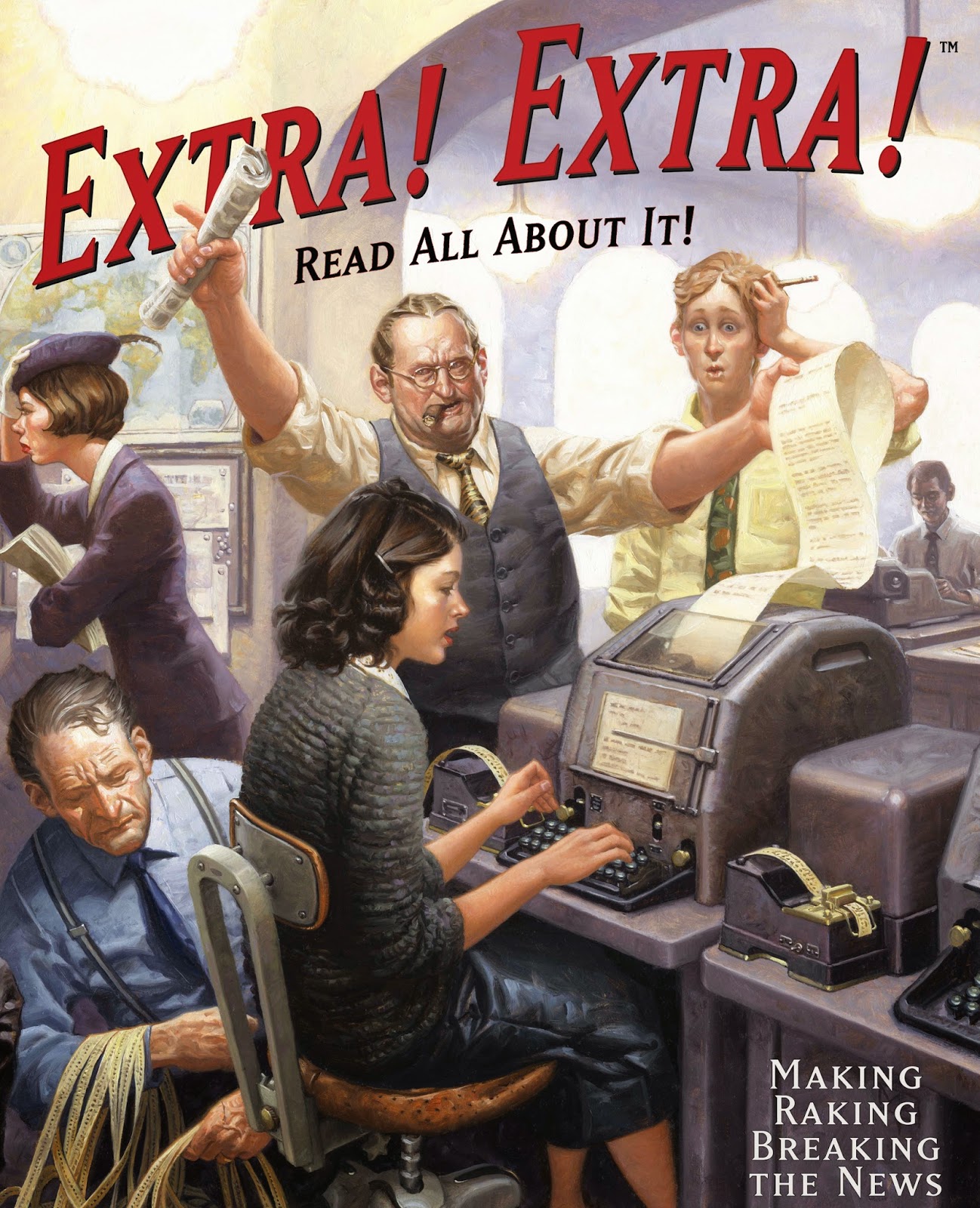 This past Thursday and Friday, we had Bob Carty of Mayfair Games here at Alliance East to demo two new games for us: Extra! Extra!, a worker placement game in which you try to print the best newspaper, and Flea Market, a dice rolling game where the goal is to acquire a certain amount of money. 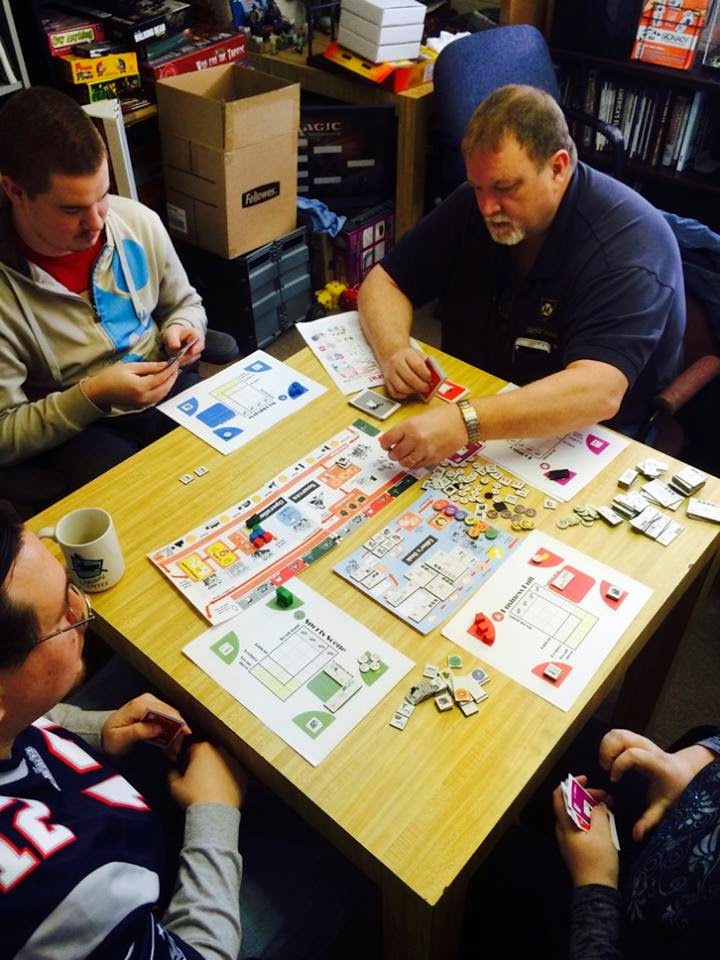 I (top left) got the opportunity to demo the games on Friday; with me were Bob Carty (top right), Tim (bottom left) and Jessica (her hands are in the bottom right). Extra! Extra! (Pictured) was the first game we played. The objective is to publish your newspaper, filling it with the best articles you can because the biggest articles are worth the most points. There were a lot of elements I really liked about this game: You earn 4$ from the bank each turn (this is set some time in the 30's, so that's enough to make a newspaper with, right?), and could make additional money by renting out workers or selling news articles, but each worker you had cost 1$ per turn to keep. Starting with 2 workers, and only able to hire a maximum of 3 more, you have a decent cash influx most turns. 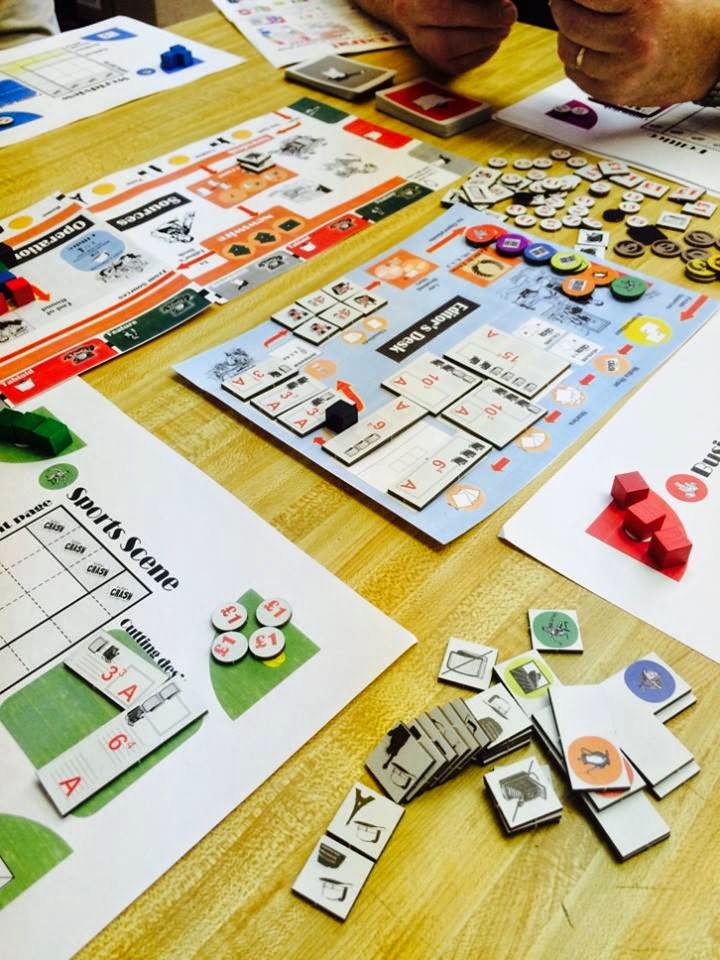 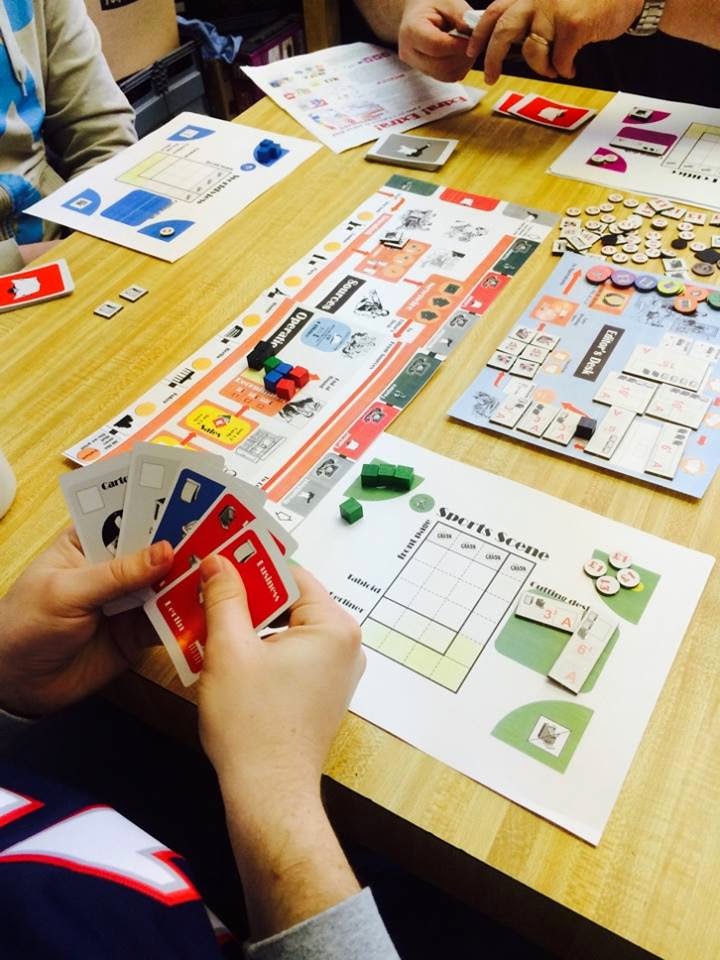 Of course, you need that cash because the game also has a bidding element to it. Many actions in the game (grabbing the news stories in a certain city, trying to publish a certain sized article) can only be undertaken by one person per turn, and if someone has already grabbed a spot that you want, you can put a worker down with a bid to take the spot, paying more money than the person there (first play costs nothing, but to bump someone you have to pay). This made for an interesting balance between wanting to hire workers in order to get a lot done, and wanting to keep money in order to guarantee you could get the things you wanted with the few workers you have. 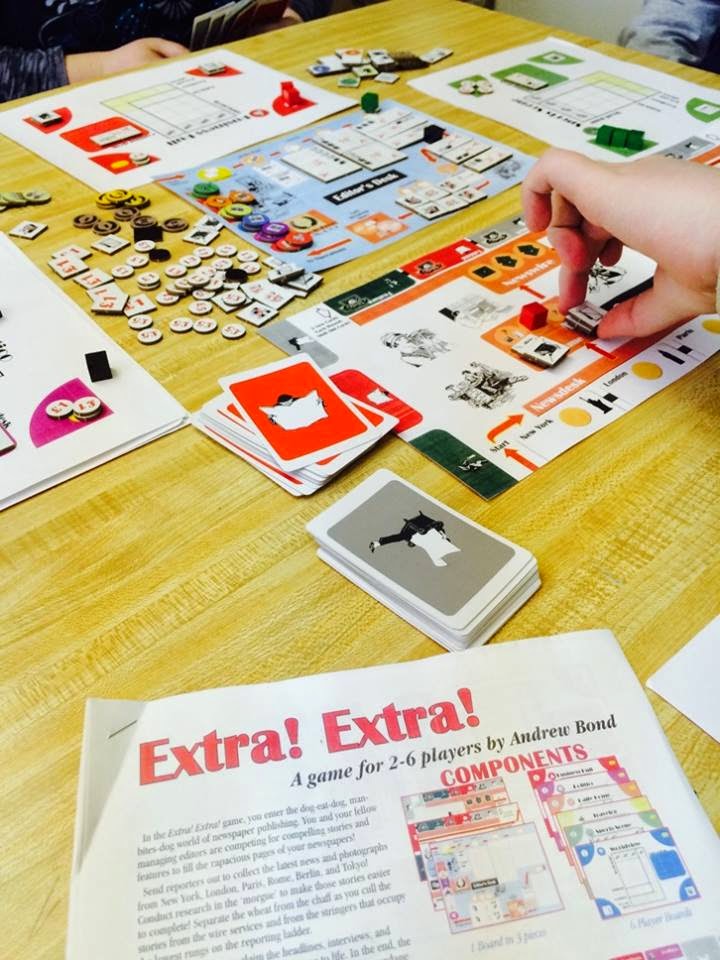 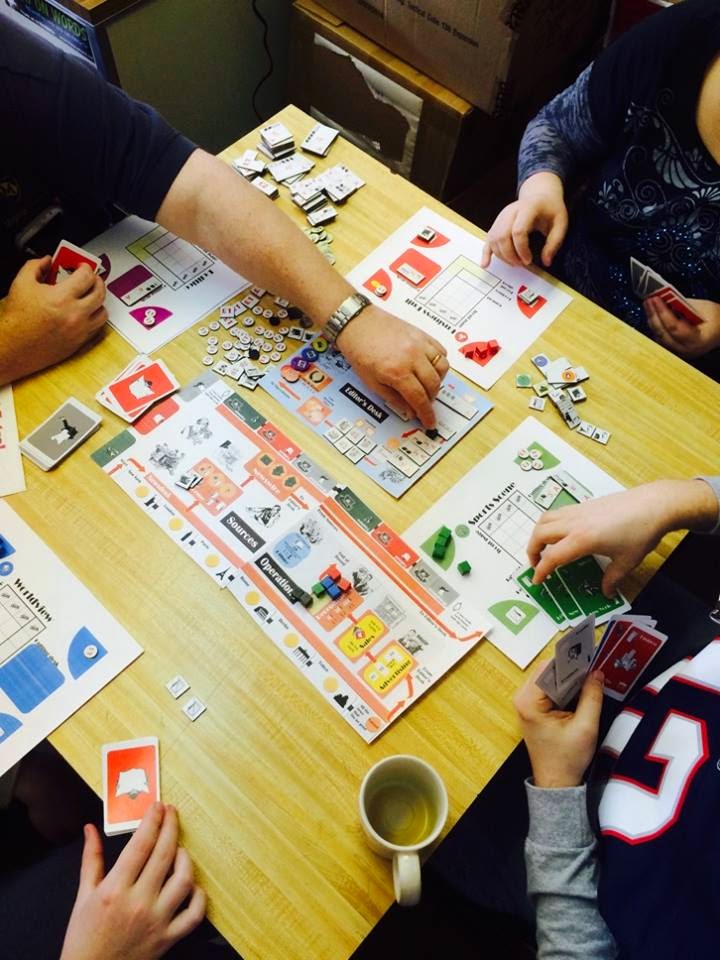 I made the decision, turn 2, to bid six dollars in order to grab five news stories from Rome (Rome was a busy place that turn). It was a very rash plan, and I came very close to not being able to field a newspaper because of it, but some lucky card turnouts made it so that my early acquisition of so much news let me publish several large articles, giving me a 28 point newspaper (compared to Tim's 27, Jessica's 25, and Bob's 22). Even then, the only reason I did that well is because we all aimed for grabbing large articles, which took us much longer than Thursday's group; they finished in half the time we did, but their winner had a score of 19. Tim said it best "Extra! Extra! is definitely a gamer's game. There's a whole lot of strategy, with choices you can make at every level of the game. That said, I really liked it and had a lot of fun with it." 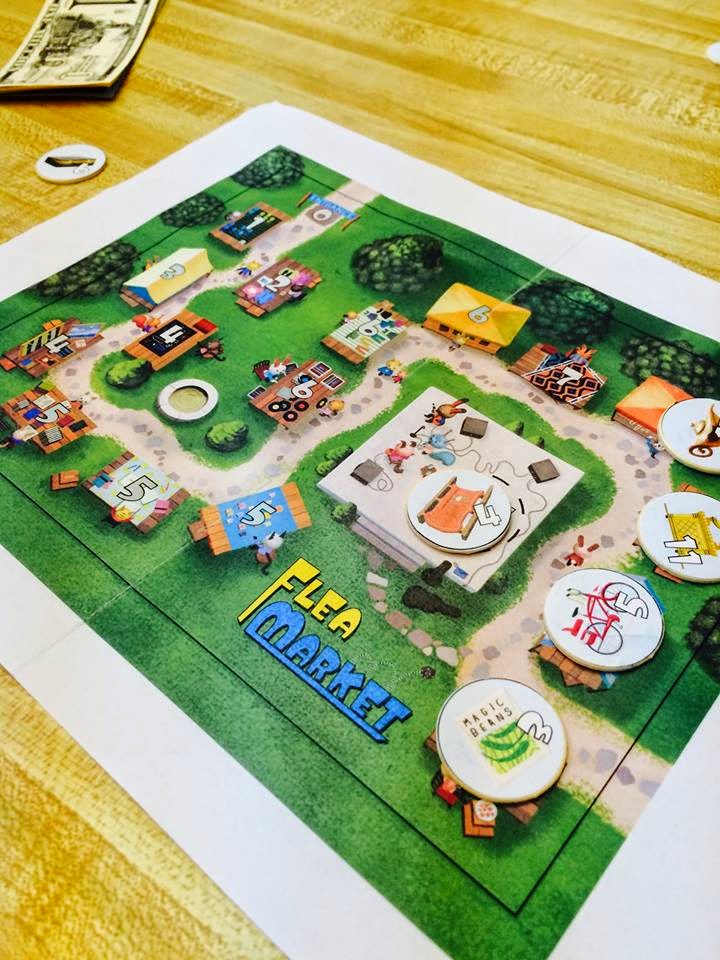 Flea Market was, by comparison, a fairly simple game. Each player starts with 24$, and the goal of the game is to get 45$ (or to have the most money when the board is cleared of items). Players take turns being the 'Sales Agent', rolling 3 dice to determine what item is up for sale. The items themselves, numbered 3 to 18, range from the Holy Grail and Excalibur to the Flux Capacitor and the Ruby Slippers. Whatever item goes on sale, the other players then roll 2 dice to determine how much they would pay for the item: highest roll gets priority for the purchase, but is also forced to pay the most if they would like to buy the item. Whoever chooses to buy the item pays the bank for it and they (or the Agent, if no one was willing to buy) then gets the time, and the Agent changes to the the next player. 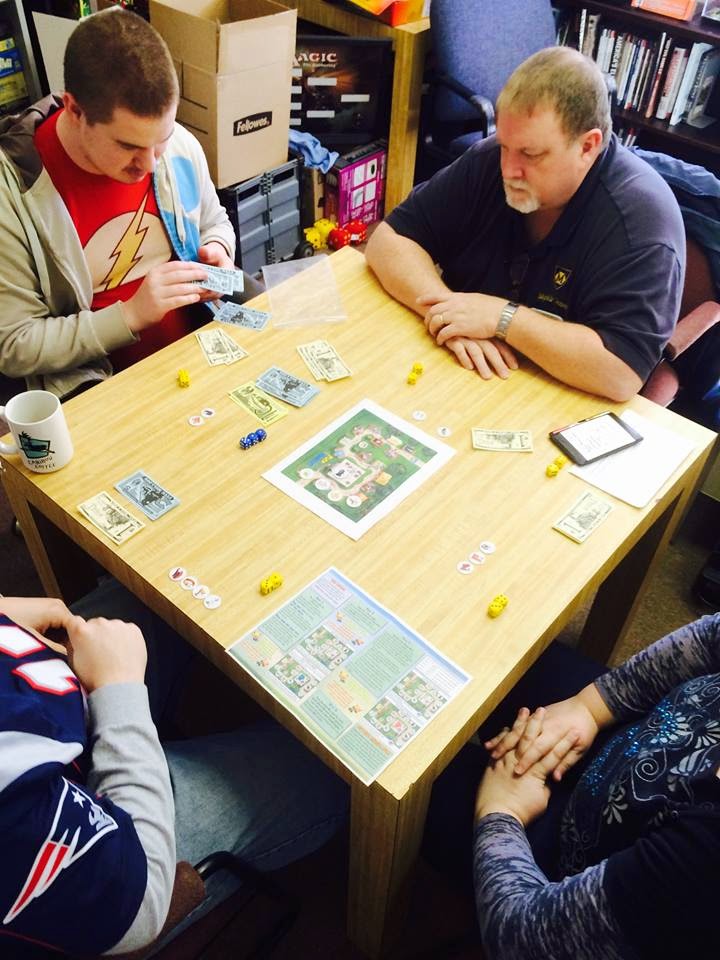 If the item that gets rolled belongs to a player, that player acts as the Agent for that item, with a twist in that they get paid buy the buyer, and the bank gives them an additional payment for a completed sale. How much the bank pays is based on how many items have already been purchased, and this is how a player wins the game; if only player-owned items are sold, there's a net cash influx for the players. Flea Market was fun because it was fast-paced, and a much easier game to learn, even if there's not as much strategy to it. Bob pointed out that Flea Market is more aimed towards non-gamers, as something that is still fun to play no matter what strategic level you are at.

Extra! Extra! and Flea Market will both be releasing later on in 2015.