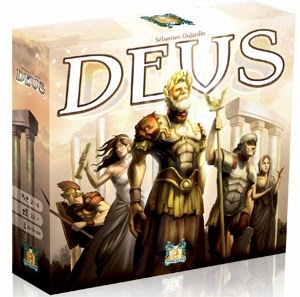 Sébastien Dujardin is probably best known for Troyes, which was a big hit in 2010. Having a game that stayed fresh after multiple plays was key to his design. "I'm obsessed with replayability. Normally, one should always find elements of high replayability in my games; it's one of my engines".

Deus, the newest strategy game by Dujardin, came out of the Essen Spiel this year with a lot of well-deserved buzz. It's a hybrid of a game that combines card and resource management with board control. The rules are pretty simple, but there is a lot of strategy to explore. Each player will take the helm of an ancient race of people looking to expand their empire into uncharted lands. Through careful hand management, players are able to explore the board and build up new cities, exploit the resources available to them, and wage war on their opponents. At the same time you must remember to keep the gods happy. Timely sacrifices will win their favor and grant you an advantage during the game.
Deus plays 2-4 and the modular board scales based on the number of players. Each of the seven continent tiles are double-sided, ensuring that the make-up of the board will be fresh with each new play. The random layout is pretty important. Some resources may be tough to come by, depending where they end up, and barbarian villages will vary in value depending on their location. Victory Points are the ultimate goal, but there are many different paths to get them.

Continent tiles are made up of seven different regions: there are always two sea regions and one barbarian village. The rest of the regions are made up of resource-producing land. Each land type produces a specific resource. Fields will give you Wheat, Forests produce Wood, Swamps yield Clay, and Mountains provide Stone. The Continent tiles are assembled in patterns depending on the number of players. They can be oriented in any way you like, but no two Barbarian Villages can be adjacent. Each Barbarian Village gets Victory Points placed on it, equal to the number of regions that surround it. Depending on the number of players, the board is constructed of 4-7 continent tiles, and you're going to want to plan your attack once you've seen the layout. You must spread your cities across the new world and the path you take can be critical.
Players begin with a supply of resources, money, and two of each of the standard building types. They also have a hand of five cards and a personal player board. The boards are designed to hold the columns of different building types that will represent your growing civilization on the board. At a glance you'll be able to see what buildings you have in play and their effects.

You can do one of two actions on a turn: Construct a Building or Sacrifice to the Gods. When you Construct a Standard Building you pay the cost in resources and/or gold (four gold can replace a resource at any time). The card gets added to the appropriate building column on your player board and a wooden building gets added to the board. Immediately, all the building cards of that type built in your tableau get activated. For example, if you play out a Science Building it gets added to your tableau; then all of your Science Buildings’ special abilities can be used. You start with the first building you constructed and work your way up, ending on the building card you just played. You can string together some pretty dynamic combinations when you construct.
A new building can either be placed in a region that already has your buildings (just one of each building type in a region) or adjacent to a region you occupy. If the unchecked expansion of your neighbors has left you surrounded, not to worry, there is a way out of that jam. You can start a new city on an unoccupied coastal space in exchange for three points.
There are five different types of standard buildings. Maritime buildings are represented with blue cards and are the only buildings that can be played on sea spaces. When activated they help you trade resources for gold or buy resources from the bank. This can be invaluable when you don't have access to a certain land type. Production buildings require green cards. They will generate resources of the land type they are placed on. Yellow cards construct Science buildings. They will allow you to gain either more cards or buildings from the general supply. Civil buildings use the brown cards and will give you money or Victory Points depending on the type that you build. Red cards are for Military buildings. They allow you to attack Barbarian Villages and your opponents. They are also the only type of building that can be moved around the board.
Temples work a little differently. The first one you build costs the standard one resource of each type. Each additional Temple you build requires you to first build at least one building of each type. You're going to want to build Temples, too. They're one of the major ways to gain end game points. Temples are each worth up to 12 points. They will score depending on different conditions at game end. For example,

two points for every wheat resource you have to a maximum of 12 or four points for each region that has five of your own buildings in it... to a maximum of 12, of course. Temples can direct the way you play your game. In order to score max points with a Temple you may have to garner your actions to meet certain end game conditions. It gives players different end game paths to points.
At the start of the game you make a general supply of Temples equal to the number of continent tiles in the game. These work as a bit of a timer for the game. When the Temples run out it triggers game end. You finish out the current round and total up your points.
Barbarian Villages will not cause you any trouble; in fact you'll be able to attack them for precious points. On the turn a Barbarian Village is completely surrounded by buildings (with at least one military building present) it will be raided. The player with the most military buildings in adjacent regions will win the Victory Points for the village. The points token is removed and the village is now treated as a dead space on the board. If two players have the same amount of military, the points are split (rounded down). Game end can also be triggered on the round the last barbarian village is attacked.
Making an offering to the gods requires players to discard cards to appease the different deities. Each god is associated with a card color. If you want to activate a certain god, you must have at least one of their color cards in the ones that you ditch. You will get a benefit from the god you invoke—money, points, extra cards or resources—but often the more important benefit is acquiring more buildings. For example, Neptune is activated by the blue Maritime building cards. He will earn you two gold for each discarded card and one maritime building. Ceres responds to the green Production building cards. She produces one resource of your choice for every discarded card as well as a Production building. You start the game with two of each of the standard buildings, but you'll definitely need more as the game progresses.
You sacrifice cards by announcing how many cards you'll be discarding then ditching those cards. It's important to put the card type of the god you want activate on the top of the discarded cards, so it's clear to the other players whose powers are being invoked.
Choosing when is the right time to build and when to sacrifice is the key tension in the game. Buildings give you more board control and can allow you to access resources and point-yielding Barbarian Villages. They also allow you to activate all of the previous building cards of a certain type. This can garner big profits. Sacrificing to the gods usually works best when you want to clear most of your hand to redraw, but sometimes it's just necessary to get the building type that you need.
At the end of the game you total up all the points you've earned so far, Temple points and resource majorities. Each resource majority and the gold majority will be worth two points. If there's no clear majority then no one gets the points.

The design process was relatively quick for Dujardin. "It was less than one year between the first prototype of Deus and its release. I love antiquity and that gave the initial idea (for the game). Then I loved the duality of maps and spatial development." Both the theme and mechanic appeared for him at the same time.
The components are exquisite. Each of the continent tiles are colorful and have interesting little details. The wheat fields have windmills and farmers working them, boats populate the sea spaces and eagles and gulls soar high above the landscape. You kind of feel like a god looking down across the world. Each of the buildings has its own wooden representative for the board and there are 96 building cards with cool art and easy-to-read iconography.
So, who is going to like this game? Although the initial teach feels like a lot of rules being thrown around, the actions are really intuitive. In a few short rounds you'll already be developing a strategy for the game.
"Deus is the fifth game from Pearl Games, but it is also the most accessible," expressed Dujardin. "I am pleased to see players enjoy it while they found my other games too complex. It's got a bit of the hand management and card combinations of 7 Wonders and the board control and resource caching of Catan. That's a pretty stellar combination! Deus is well worth a try: for a small time investment to learn the rules, you'll get hours of variable fun in an undiscovered, ancient world.

Deus will be available on January 28th!