Creating Roll For It! Deluxe


The preorder deadline for Calliope Games' Roll For It! Deluxe is coming up soon: this Friday, in fact! As we're coming up on that deadline, the designer of Roll For It! Deluxe, Chris Leder, has shared with us some of his insights into the game making process. Check it out here!

Last year when Calliope Games released Roll For It!, it quickly found its niche as a fun, dice-rolling, card-matching gateway game perfect for families and gamers alike. As its designer, I’ve been humbled by the myriad audiences that have embraced it. As we prepare to release the Roll For It! Deluxe edition, I want to take a look at how this surprising little game grew from something I designed to play with my family to one of Calliope Games’ most popular titles.

My previous games, designed for my gaming group, all had deep Eurogame trappings. With Roll For It!, though, I wanted to step out of my comfort zone. I resisted themes of any sort, limited my components to those that could fit in a tuckbox for easy portability, and determined that the game should be as easy to learn and play as possible.  As a sucker for dice-rolling, I knew that had to be a central mechanism.

Thus, Roll For It! was born. The rules are easy: roll a handful of dice, match the results to cards of specific points values, and try to reach 40 points first.  Its simplicity is its biggest selling point—it takes less than one minute to learn and plays in less than twenty. 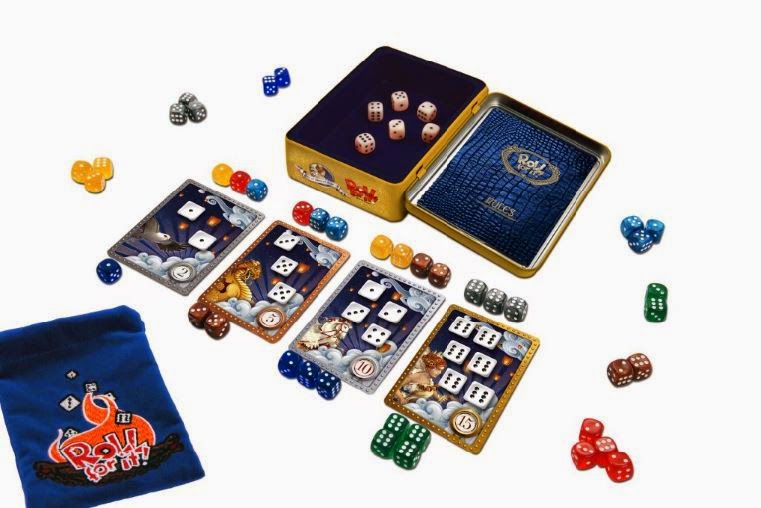 Roll For It! proved to be a game my family wanted to play over and over. I’ve played with them at home, with my friends at the pub, and with strangers on the floor of an airport terminal. I had a game that casual players enjoyed, but that would probably turn off hardcore gamers. That was okay with me—Roll For It! was never mean to be a gamer’s game.

How wrong I was! When I joined forces with Calliope Games, Roll For It! evolved into a refined and retail-ready game. We published two regular editions: red and purple. Each set has similar components (30 cards and 24 dice – pearl in one set, translucent in the other), and you can play 2-4 players out of one set or combine both sets to play accommodate up to 8 players.  We went with an abstract, classic design that gives Roll For It! a familiar feel—like it’s been around for years, resting in a familiar spot on the game shelf and popping up at family gatherings.

Just as before, casual players and families took to it immediately.  But to my surprise, it also gained a following with gamers. Like Tsuro and other Calliope titles, Roll For It! wonderfully short palette cleanser during game night. It’s a fantastic choice for gamers looking to introduce their hobby to newcomers without sacrificing fun. We’ve had gamers take Roll For It! with them to conventions, on road trips, and to their friendly local game store.


When we set out to make a deluxe version of the game, we decided to make it the ultimate gamers’ version—a beautiful game that even dice-game haters couldn’t resist!  We knew we wanted to use the iconic Calliope artwork, done by celebrated artist Echo Chernik. Echo’s work brings a balance of whimsy and beauty that attracts both families and gamers. We also wanted to elevate the packaging while maintaining the portability Roll For It! players love. We used a hinged tin case with a flocked the interior to allow players to roll their dice into it without a loud rattle. Since the tin would be used as a dice tray, we designed a beautiful embroidered crushed velvet dice bag to hold extra components during play.

I am incredibly proud of how Roll For It! has reached audiences, traveling the world and hitting tables time and again.  For this game—one designed to appeal squarely to families—to thrive in the gaming world is a surprise and a delight.  Looking at the final Deluxe Edition package, from the tin to the dice bag to the amazing artwork, I couldn’t be more proud to see one of my games reaching people and helping them build memories around the gaming table.

-Chris Leder, Roll For It! Designer