New from Z-Man Games! Check out these Pre-Orders 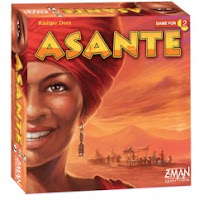 In Swahili, “Asante” means “Thank you.” A word every good merchant should say when bidding farewell to his customers. Through skillful buying and selling of wares, the players try to run the most successful business. They improve their chances by employing the help of various people and artifacts, each offering a different special ability. Players must keep on their toes as the other merchant sends animals to attack them. And whoever can best make use of the power of the Holy Places will reap great benefit. 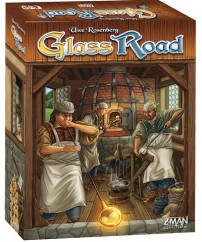 Glass Road leads you into the Bavarian Forest of the 18th century. With two Production wheels at your disposal, you will be tasked with the production of glass and bricks as well as managing other resources. You will need to develop your very own landscape and build upon it a variety of buildings that will grant you many benefits. At the heart of the game is your set of 15 specialists, of which you will only use 5 during each of the game’s building periods. But it is not as simple as that, for your opponents also have access to the same cards, and if one of them plays a card you’ve chosen, your options will be reduced drastically. In this game about glass making, flexibility will be your best asset to seize victory!

You are architects that must complete three different buildings by using Blueprints.
Who will be the best architect?
1. Get your Blueprint
2. Each turn, choose a die that you will use to erect your building.
3. Reveal your building and find out who wins the awards and prizes.
After a few rounds, you will see who was able to build his way to victory!

In Russian Railroads, players compete in an exciting race to build the largest and most advanced railway network. In order to do so, the players appoint their workers to various important tasks.The development of simple tracks will quickly bring the players to important places, while the modernization of their railway network will improve the efficiency of their machinery. Newer locomotives cover greater distances and factories churn out improved technology. Engineers, when used effectively, can be the extra boost that an empire needs to race past the competition.There are many paths to victory: Who will ride into the future full steam ahead and who will be run off the rails? Whose empire will overcome the challenges ahead and emerge victorious? Russian Railroads A game of planning, strategy and optimization for 2-4 Emperors.